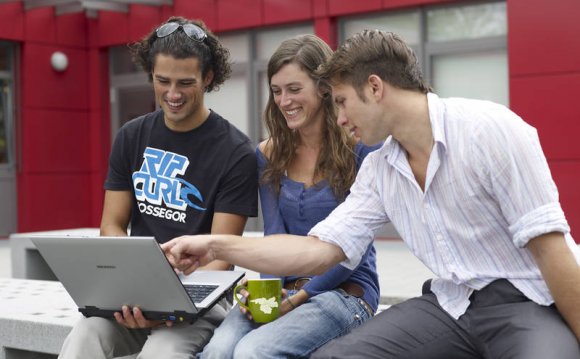 Jay Malone is capitalizing on Germany's push to recruit international students by helping Americans who want to study there. (Mallory Noe-Payne/WGBH).

Despite the high cost of college in this country, most Americans will choose to go to school here. But there is a growing number of students who are getting their degrees in other countries, like Germany, where their taxpayers pick up the tab. WGBH's On Campus team recently traveled to Cologne to explore this higher ed defection, and the implications for the United States.

At a cafe just around the corner from the University of Cologne, students sink into big armchairs and sip lattes.

This is Rachael Smith’s favorite place to spend down time between classes. The 26-year-old is working on her master’s degree here and has been living in Germany for almost two years.

“I love it here. I really like the city. I love the culture, ” Smith said. “Cologne is a very open city, a very friendly city. I definitely get the vibe that Germans appreciate a foreign presence in the city.”

Rachael is one of almost 100 Americans studying at the University of Cologne. And, like all of them, she’s doing it for free.

“I wouldn’t have studied my master’s in the United States, just the cost was not an option, ” Smith said. “I have enough debt from studying my undergrad, so I didn’t want to pile that on. But when I found this program, I realized it could be an actual option.”

Free education in Germany isn't new, but the country has seen an uptick in interest from abroad. Today more than 150, 000 international students are getting a degree here, including more than 4, 000 Americans. That’s double what it was just five years ago.

The University of Siegen is in a small regional capital east of Cologne, Germany. (Mallory Noe-Payne/WGBH).

German universities are marketing heavily. They’re highlighting their strengths in research, and building connections with professors at other schools. And while free is a great selling point, it’s also just the start.