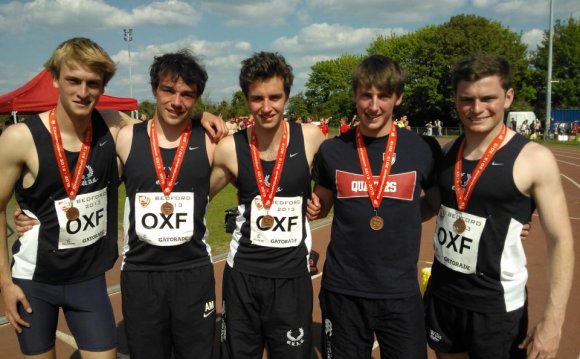 Two weeks out from the 150th Anniversary Varsity Match at Iffley Road, Oxford University Athletics Club (OUAC) travel to Bedford this weekend for the . Dan Hooker previews our team, who are determined to show Cambridge, and the rest of the country, their mettle.

Leading the charge will be Javelin thrower Aidan Reynolds, who goes into the event 4th in the National Rankings at this early stage of the season.

While targeting a first BUCS medal, Aidan will also be chasing the Welsh Commonwealth Games qualifying standard of 70 metres. Which he came within a metre and a half of last weekend at Loughborough.

Also hoping for international honours this season is fresher Rowan May. 4th in the Pole Vault at the European Juniors last summer, he hopes to step up to the global stage at this year’s World Junior Championships in Oregon.

To do so he will need to clear at least 5.20m – a 10 cm improvement on the Oxford record he set at the National Indoor Junior Championships in March. Ranked 4th on Personal Best coming into the competition, he will hope that a place on the podium comes with a plane ticket attached later this summer.

But if the men’s team are to improve on their 10th place finish last year they will need more than just their international stars on form.

The Men’s 4×400 team (Adam McBraida, George Gundle, Craig Morten and Ralph Eliot) fresh off crossing the Atlantic to compete at the prestigious Penn Relays last Friday, will look to defend and even improve upon the bronze medals they won last year while also hoping to progress to the finals of their individual events. Despite stiffer competition it would be no surprise to see the Dark Blues back on the podium again after the last event of the championships.

An outside contender for the medals is Triple Jumper Sam Trigg, 6th at the Indoor event back in February, who demonstrated that he is in excellent form by opening his outdoor campaign with a personal best on Easter Monday. Sunday’s final may also provide a Varsity preview, one of his main rivals for the rostrum being from Cambridge!

Other likely Oxford finalists include Steeplechaser Alex Howard, ranked 4th Junior in the country over 2000m but stepping up to the senior 3k distance for the first time, Discus thrower James Heywood and 800 metre runner Tom Frith.

The Women’s team will also be determined to demonstrate their credentials ahead of the big day on the 17th May. Their star name is distance runner Emily Moss. 5th Indoors over 1500m, Moss will be going over the 2000m Steeplechase on Monday looking to add a BUCS medal in Dark Blue to the two she won during her London days.

An area of real strength for the Oxford women is the throws, with new university Discus record holder Christina Nick looking to follow making the Shot final at the Indoor event with a repeat performance in both her favoured events over the Bank Holiday Weekend.